‘You’ve bought what?’ exclaimed my wife Sue over the phone on hearing that I had just acquired two Dexter female calves whilst she was on a short trip to the UK last month (January 2014). Well, I had given her my solemn promise not to buy any milking goats during her absence which was another idea I had been mulling over, so buying cattle rather took her on the hop….. Happily she has now forgiven me after I let her have the naming rights, so Daisy and Buttercup are now lying in the sun outside one of our field shelters, lazily chewing the cud.

Since completing a barn conversion here last year that has allowed us to free up a second house for summer rental, we have been giving some thought on how to become increasingly self-sufficient, more as an exercise in good housekeeping than for any esoteric ecological reasons. John Seymour’s Complete Book of Self Sufficiency was given to me as a present by Sue before we left England and this excellent and renowned book has become our bible for home food production ever since.

We already engage in barter, or troc as it is known locally, with a local farmer – he cuts our hay annually and leaves us with what we need, taking the rest for his livestock. In return, we get our black Ouessant sheep sheared and are given 3 kayed lambs every year which we bottle feed and let graze in our orchard until they are butchered for the deep freeze in September. We also help prune his vines in February and lend a hand with the vendage in September for which we receive two exceptionally good lunches and 20 litres of moût (the first pressings of grape juice) that we mix with our own eau de vie to make a delicious aperitif called ratafia. This year we are extending the arrangement so that in return for one of them, he has agreed to provide us with barley flour, grown and milled on his farm, to feed 4 young pigs that will be arriving shortly for fattening.

In the 7 years that we have lived in South-West France, we have noticed the steady growth of troc and a move towards greater self-sufficiency among many local families and artisans who are struggling to survive increased officialdom and taxation, onerous labour laws and reduced farm prices coupled with increased food costs. In addition to large vegetable gardens, many families have a substantial basse-cour (literal translation would be ‘back yard’) where they keep hens, guinea fowl, ducks, geese and rabbits for egg, meat and pâté production. Fruit and vegetables grown in their gardens are routinely bottled or frozen in the summer, plums dried to make prunes and any residual fruit turned into either eau de vie or juiced and bottled or used to feed their livestock. Potatoes and beetroot are grown to feed the rabbits, grass cuttings used to feed hens and guinea fowl. A goat is often kept to make cheese from its milk and many people still routinely make their own bread in traditional wood-fired ovens. A pig will be fattened and home-slaughtered for meat, hams, sausages, salami and pâté or a veal calf will similarly meet its fate and, rather sadly, unwanted and unsellable male donkeys turned into sausages. Likewise, bee-keeping has taken off with more and more people wanting to keep bees – not only for their honey production but also to improve the pollination of their crops. Whilst people still take their excess produce to market, increased officialdom means they are now happier to swap any excess with their neighbours or just give it away in anticipation that they will receive some form of reciprocity in the future.

The most common form of troc is the free exchange of labour among artisans as onerous labour laws lead most artisans and farmers to remain as sole traders and to avoid employing anyone else like the plague. So, the use of family and friends to cover periods of high activity, such as pruning or fruit picking, has become the norm where the cost of employing transient labour or students has now become prohibitive due to minimum wage legislation and social security costs that effectively double any wages paid for the employer. Where this not possible, labour intensive activities are being mechanised (grape picking) or just abandoned, with fruit orchards planted several years ago now being grubbed up or the fruit just left to rot on the trees.

With our 33 acres of gardens, hay meadows, orchards and forest, we have embraced the local ethos and our own vegetable, fruit, herb and nut production is as good as anyone else’s and we produce the vast proportion of our own meat, whilst still being able to keep a pair of donkeys for pleasure. We have 4 wood burning stoves in our three houses and are able to harvest wood from our forest to keep them burning in the winter months. Plans are in the making to construct a wood-fired bread oven so we can make our own bread and, as the new Dexter calves will not become milk producers for another three years, I have some more to do to convince Sue to let me buy a couple of milking goats so we can make our own cheese and butter, using any residual milk or whey to feed the pigs, though I suspect that on this occasion the concession of naming rights will prove somewhat inadequate to win her over!

We use sheep as lawnmowers in the orchards and dwarf goats to keep down areas that we’ve cleared in the forest. As they regularly reproduce, they easily pay for themselves as we sell off the lambs and kids when they are three months old and they have replaced an expensive tractor lawnmower that shook itself apart on our rather ‘chaotic’ terrain and furthermore, it didn’t reproduce to pay for itself… We rear a rare breed of turkeys – the red Rouge des Ardennes – that we sell on to breeders rather than eat. We keep bees for honey and, as we are now well-known in the area, we regularly receive calls from people in the village or from the Mairie for help to catch swarms in April and May which we then re-house properly in hives and sell on to other bee-keepers once the new colonies have become established.

Like everyone else we collect blackberries and quinces from the hedgerows and juniper berries and mushrooms in the forest – where an abundance of girolles, cepes, pieds de mouton, mousserons, as well as plain old field mushrooms can be found at certain times of the year. There are many other edible mushrooms too, but we’re still somewhat nervous about our identification abilities so tend to avoid the less obvious ones.

Manure from the livestock is used for fertiliser and compost in Sue’s vegetable and flower gardens and water for the livestock and the garden comes from either two natural wells close to the house, large butts that collect water from the barn roof or from the river, when the donkeys and calves are paddocked close by.

Gifts to neighbours and friends from our over-supply of seedlings, cuttings, fruit, vegetables, honey, jams and eggs and our willingness to let the local hunt onto our land mean that we receive reciprocal gifts during the year of figs, walnuts, melons, guignot (bitter) cherries, winter salad, pumpkins, tomatoes, courgettes, wine, goats’ cheese, a side of venison and joints of wild boar which add to, and complement, our own food production.

Whilst we have a number of vines that produce table grapes, we view wine production as a step too far, though we have eau de vie made from our plums by a travelling distiller, who sets up his two stills at a local farm up in the hills in March each year. This is excellent for bottling fruit though is otherwise an acquired taste but we make our own ratafia, vin de noix (green walnut wine), vin de peche (peach wine), guignolet (cherry wine), and various derivatives of sloe gin such as damson de vie, sloe de vie, blackcurrant de vie and raspberry de vie.

‘So what?’ you may ask. Well, whilst we fully appreciate our life-style is not for everyone, it gives us enormous pleasure, an opportunity to integrate almost seamlessly into French rural life making friends with people in all walks of life, a healthy and active outdoor existence (if one ignores the potential for cirrhosis from over consumption of eau de vie), the knowledge that the food one eats has been reared free-range, compassionately and in a non-intensive environment. Furthermore, it tends to taste a heck of a lot better too! 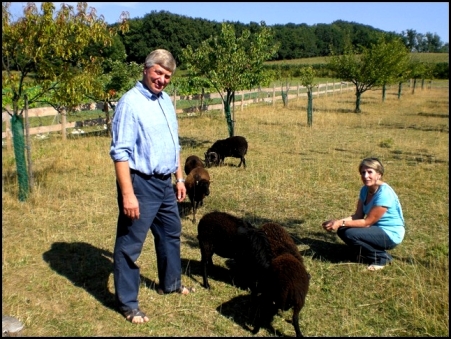 My wife and I checking our Ouessant sheep in the orchard